Collecting coin operated machines had grown quickly during the late 1970’s and throughout the 1980’s.  By the mid 1990’s it had peaked and there seemed to be lack of new collectors entering the hobby.

C.O.C.A. founder, Frank DeMayo wondered what the future held for the hobby. Frank had always met for drinks and conversation with a few of the guys on Thursday evening prior to the Chicagoland Gameroom Show in St. Charles Illinois.  It was at one of those gatherings that he proposed the idea of forming an organized group of coin-op collectors.

It sounded like a great idea, and the club was first started in the spring of 1997 with three members, Frank Demayo, Tom Gustwiller and Bill Howard. The club was temporarily named The Gambling Device Society of America.

The MGDSA Newsletter (Gambling Device Society of America) was started by Frank and Gloria DeMayo. Frank became President and the first official meeting was held in Chicagoland on November 21, 1997.

Dick Bueschel was the first featured speaker on Cast Iron Machines.  At the time of this meeting, membership had climbed to 40 members.

In December of 1997, a form was sent out requesting choices or suggestions for a new name for our club.  This form was also sent out in the very first newsletter in January of 1998. A vote was taken at the spring meeting in 1998, and COCA was declared the winner and it was made official at this meeting on Friday, April 17, 1998.

COCA Presidents over the Years:

In 2004 the club held its first national convention in Cleveland, Ohio. Local gatherings also began to happen in other parts of the country.  Many collectors clubs in other hobbies have had membership declines over the last few years.  Through innovation, COCA. has continued to grow and now has more than 700 active members. A COCA National Convention continues to be held in a new location every year. COCA meetings are held twice a year in conjunction with the Chicagoland Show.

The era of coin-operated machines is concurrent with the gasoline powered automobile.  The last quarter of the 19th century saw the commercial birth of both major industries and the first quarter of the 21st century will probably witness their demise.

These machines continue to operate. Coins, however, are quickly being replaced by paper bills, credit cards and other new technology, while cars are also converting to newer technologies.  Both coins and gasoline will someday face extinction.

During the American industrial revolution, coin-op inventors produced numerous devices.  The vending, amusement and gambling machine industry grew side by side with the other great inventions of this era.

Vending machines have been around longer than any other type of coin-op.  They can be traced back to an ancient Egyptian holy water vendor used more than 2200 years ago.  A five drachma coin would provide a small splash of water with which a worshiper could sprinkle himself.  Around 1700, pipe tobacco and snuff vendors appeared in England.

In the 1880’s, foreign-born inventors on American soil developed and manufactured many types of vending machines. Matches, collar buttons, chewing gum, peanuts, stamps and cigars were just a few of the multitude of items that one might purchase for a penny or nickel.

Gambling devices soon followed and during the 1890’s the industry flourished.  Originally all coin-operated machines were called slot machines, but later the term would be used only when referring to gambling devices.

In 1898, Charles Fey created the first three-wheel payout slot machine.  The basic mechanism was copied by numerous manufacturers and remained unchanged for more than 60 years.  Hundreds of thousands of “One Armed Bandits” were produced.  Collecting antique slot machines is legal in most states provided you do not use them for gambling.  Collectors should check the status of their state law before purchasing.

The coin-op industry exploded during the 1890’s and early 1900’s.  Machines could be found in every city and town.  Tobacco shops, hotels, country stores, saloons, train stations and beach resorts became great sources of revenue for coin machine operators.  World War I, however, would slow the industry.  The 1920’s and 30’s, which saw the return of huge production numbers, are often called the “Golden Age” of coin-op.

A second war would again result in a slowdown as manufacturers were prohibited from using materials that were deemed critical for the war effort and factories were converted to produce military goods.  From 1950 to 2000, coin-op production would continue to expand into a multi-billion dollar industry.

Coin machines reflect the art forms of their production periods. This may sometimes help collectors identify the machine’s age. This is especially true for gambling machines.  The earliest machines were very simple in their design.  In the late 1890’s, machines had Victorian lines.  This would give way to the straight lined Eastlake décor.

After the turn of the 20th century, designs were marked by art nouveau and that would later switch to geometric art deco.  Modernism prevailed and would dominate most all production after 1940.

Arcade and vending machines were more brightly painted and evolved to a carnival-style look.  The earliest machines employed cast iron, mahogany and quarter sawn oak in their cabinetry, while later machines would use aluminum and lesser quality woodworking.

The number of coin-op collectors worldwide is estimated to be in the low thousands.  This is partially due to the scarcity of available machines on the market.  These machines were originally sold to the operators rather than to the public that used them.  Machines were seldom put up in someone’s attic like most other antiques.

For the most part, these machines were seen as utilitarian money makers by their owners; once they came into disrepair they were discarded and replaced with newer models. “Evil gambling machines” were often destroyed by law enforcement. Arcade machines endured the constant abuse of children.  A vending machine was no longer considered useful when price changes were required or products were redesigned.

Ken Rubin, a member of the COCA Hall Of Fame, and author of the first definitive coin-op book published in 1979, “Drop Coin Here”, is considered to be one of the most widely recognized authorities on coin-op machines and their history.  Here is an excerpt from “Drop Coin Here” about his outlook on collecting coin operated machines.

“The hobby of collecting antique coin-operated machines has grown as more people recognize the exciting qualities these machines possess. As an art form, they cover the period from 1885 to about 1950.  Within this period, the diversity of style and function is extraordinary.  The charm, beauty, and character found in these objects as works of art would in themselves be enough to make them treasures.”

“But antique coin machines offer a great deal more.  They accept our coins and perform as willingly today as when they first appeared.  They elicit a sense of nostalgia that conjures up memories of naïve days and simple pleasures.  They invite the attention of the craftsman and the mechanic to keep them in presentable and operating condition.  They are fun, unique artifacts of America’s cultural past.”

Ken is currently working on his new, soon to be published book, “Silent Cigar Salesmen, The History of Cigar Vending Machines.”

This short summary of coin-op history is based on the research and writing done by Ken Rubin, Dick Bueschel, Marshall Fey, Bill Enes and Nic Costa.

If you are seeking more extensive information and photographs please explore their work. 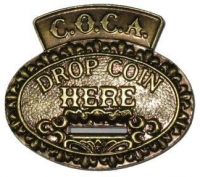